First United Methodist Church in downtown Dearborn, Michigan, is one of those churches, from a physical point of view, makes me think of “church.” It’s classical in the sense that there is no mistaking it for anything other than a house of worship.  It’s very American, yet very European.  It’s not an uncommon style.  That it is made of stone makes me think of strength and courage. 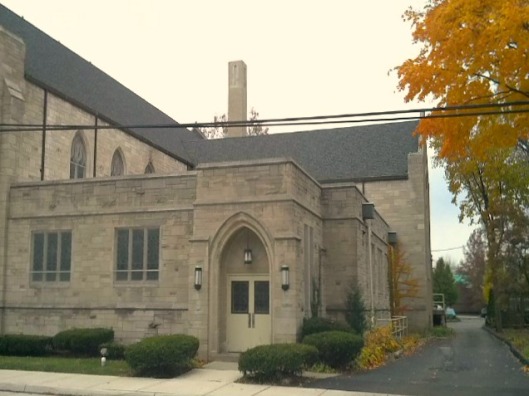 A bit about the congregation’s history, as well as the history of the area…

The seeds of Methodism were first planted in Michigan in 1810 along the banks of the Rouge River in Dearborn. And it is from this beginning that First United Methodist Church of Dearborn traces its roots.

Michigan made its first appearance in the official records of the Methodist Church in 1809, when the Rev. William Case of Massachusetts was sent here. It took Case a month to make the 600-mile trip on horseback, much of it through trackless wilderness.

One of the converts of Case’s sermons was Robert Abbott, auditor and treasurer of the recently organized Michigan territorial government. A nucleus of converts was formed around Abbott, and his home became a hostel for Methodist preachers.

Abbott, his wife and five other men and women organized Michigan’s first Methodist Society in 1810. Within a year the group had grown to 30.

But just as Methodism began to grow, the War of 1812 broke out. The seven founders continued to hold services in their homes, and when the war ended, the Methodist circuit riders returned. On March 31, 1818, the Methodists had enough faith in their future to build a church.

The exact location of this 20-by-30-foot building is not known. But it was built on an acre of land donated by settler Thomas Sargent, who had cleared land for a farm along the Rouge River. A study of land records indicates the site was probably just east of the present intersection of Greenfield and Butler roads in Dearborn.

An article in the April 3, 1818 Detroit Gazette describes the church:
“The first Protestant Church in the Territory of Michigan was erected at the River Rouge on the thirty-first ultimo (of last month) by a society of Methodists, a body of corporate belonging to the Methodist Episcopal Church in the United States. The said society was established at the River Rouge in the year 1810, and through the mercies of God has remained inflexible through the storms of war, and various trials; and by the divine blessing is still in a prosperous way.”

The article was signed by Robert Abbott, who identified himself as a trustee of the church.

The rustic building was used until 1828, when members again began meeting in homes. The church was later set afire and lay in ashes until 1851. In that year a delegation from Detroit carried away some of its timbers, from which canes were made and sold at the following Michigan Annual Conference, an annual meeting of Michigan Methodists. A cane still handed out today to the Conference’s oldest minister contains wood from the logs of that church.

In 1838, a frame church seating 200 was dedicated on the same property. Its pastor was William H. Brockway, the first minister licensed by the Methodist Episcopal Church in Michigan. That church continued to be used until 1892, when under the leadership of Rev. M.H. Bartram, a better location was purchased for $250 on Chicago Road, now Michigan Avenue. The lot was between Mason and Howard, where the Calvin Theater later stood. Here, a brick church was built.

Construction of the Chicago Road church was made possible in part by the gifts of William Ten Eyck, a member of a pioneer Dearborn family who operated a famous inn at a stagecoach stop near the present Michigan Avenue bridge over the River Rouge. Because of his generosity, the new building was called the Ten Eyck Memorial Methodist Episcopal Church.

In 1923 this church was sold for $90,000 and torn down to make room for the Calvin Theater. This money was invested in the present day church building at Garrison and Mason streets.

Services were conducted in a nearby high school until the new building was completed. Committee meetings and social functions were held in members’ homes or other nearby churches.

A pamphlet published during the period described the church this way:
“The new Dearborn Methodist will be a real church in the best sense of the term. It will be a thing of beauty to satisfy the eye. It will be an educational opportunity to furnish the mind. It will be a friendly shelter to cheer the heart. It will be a temple of worship to refresh the spirit.”

In 1955, the church began studying expansion again. By 1963, the church had added its North Transept, which that expanded the sanctuary’s seating space from 650 to today’s 1000, as well as a large church parlor. Several adjacent properties were also purchased for parking, and stained glass windows were added to the entire church at a cost of $55,000.

Most recently, the church in 1996-97 added its new Pickett Memorial Organ, one of the largest pipe organs in the Detroit area , at a cost of roughly $100,000.

Today’s First United Methodist Church of Dearborn serves as it promised to in the 1920s, meeting the needs of its 900 members’ minds, hearts and spirits, and fulfilling the mission of all churches everywhere: Create disciples of Jesus Christ.